The stories of Hannah living with her heart defect and the surgery itself are better left for a day when I can give them the time they deserve.

I refused to carry Hannah into the hospital in the car seat because I wanted to hold her for as long as I could.

During pre-op we had to change her out of her jammies and into a kid sized hospital shirt that was way too big for her. She’d never looked so small and innocent before, just staring intensely at her hand.

A female anesthesiologist assistant was sent to us to take Hannah, as if handing my baby over to a woman would make it easier. Hannah was sound asleep when I gave her to this stranger. 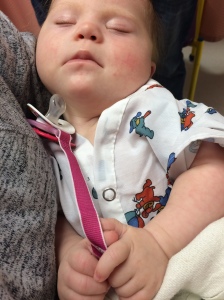 As we walked out of pre-op my only thought was “what if that’s the last time I see Hannah awake?”

Watching Hannah wake up from sedation might be the worst moment of my life. She was silently screaming, her face filled with terror and panic as she fought against the arm restraints. The nurse called for help because the situation was becoming an emergency. It was like a scene from a television medical drama when doctors and nurses rush into the room.

Hannah wore a pink bow and booties every day. 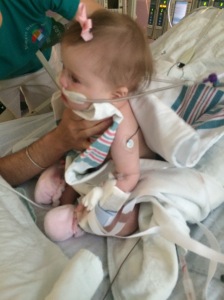 She smiled at every single person who looked at her. Even during 2 am chest PT and vitals.

After only 6 nights we got to take her home.